The vacant seat on the U.S. Supreme Court has returned to the spotlight, with President-elect Donald Trump promising supporters that he will nominate a conservative justice, and Democrats fuming from Senate Republicans’ refusal to hold a vote on Obama nominee Merrick Garland.

This event will be livestreamed on the Wilson School’s YouTube Channel; virtual attendees can ask questions on Twitter using #WooLection16. The event is co-sponsored by the Woodrow Wilson School, the Program in Law and Public Affairs and the Department of Politics. A book sale and signing will follow the discussion.

James D. Zirin, author of the recently published Supremely Partisan: How Raw Politics Tips the Scales in the United States Supreme Court ,will discuss this issue during this free, public lecture. 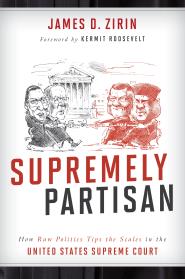 In Supremely Partisan,  Zirin argues the Supreme Court has become increasingly partisan, rapidly making policy choices right and left on bases that have nothing to do with law or the U.S. Constitution. He explains how America arrived at the present situation and looks at the current divide through its leading partisans, Justices Ruth Bader Ginsburg and Sonia Sotomayor on the left and and Clarence Thomas and the late Antonin Scalia on the right. Zirin also examines four of the Supreme Court’s most controversial recent decisions – Hobby Lobby, the Affordable Care Act (also known as Obamacare), gay marriage and capital punishment – arguing that these politicized decisions threaten to undermine public confidence in the Supreme Court.

A 1961 Princeton graduate, Zirin is a leading litigator who has appeared in federal and state courts around the nation. He is a former Assistant United States Attorney for the Southern District of New York, having served in the criminal division of that office under the legendary Robert M. Morgenthau. Zirin is host of the critically acclaimed television talk show, “Conversations in the Digital Age,” which can be seen weekly throughout the New York metropolitan area and will shortly be nationally syndicated.