Supported by the Office of the Provost. Cosponsored by the James Madison Program in American and Ideals and Institutions and by the Program in Law and Public Affairs. 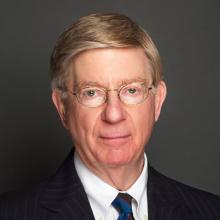 George F. Will’s newspaper column has been syndicated by The Washington Post since 1974. Today it appears twice weekly in more than 440 newspapers. In 1976 he became a regular contributing editor of Newsweek magazine, for which he provided a bimonthly essay until 2011. In 1977 he won a Pulitzer Prize for commentary in his newspaper columns.

In June 2019, Will released his most recent work, The Conservative Sensibility. Eight collections of Will’s Newsweek and Washington Post columns have been published, the most recent being One Man’s America: The Pleasures and Provocations of Our Singular Nation (2008). Will has also published three books on political theory: Statecraft as Soulcraft: What Government Does (1983), The New Season: A Spectator’s Guide to the 1988 Election (1987) and Restoration: Congress, Term Limits and The Recovery of Deliberative Democracy (1992). In 1990, he published Men at Work: The Craft of Baseball, which topped The New York Times bestseller list for two months. In 1998, Scribner published Bunts: Curt Flood, Camden Yards, Pete Rose and Other Reflections on Baseball, a best-selling collection of new and previously published writings on baseball. His most recent book on baseball is A Nice Little Place on the North Side: Wrigley Field at One Hundred (2014). In July 2000, Will was a member of Major League Baseball’s Blue Ribbon Panel, examining baseball economics.

In 1981, Will became a founding panel member on ABC television’s This Week and spent over three decades providing regular commentary. Then followed three years with Fox News where he appeared regularly on Special Report and Fox News Sunday. He is now a regular contributor to MSNBC and NBC News.

George F. Will was born in Champaign, Illinois, educated at Trinity College in Hartford, Connecticut, Oxford University and Princeton University, where he earned his Ph.D. and currently serves as a trustee. He has taught political philosophy at Michigan State University, the University of Toronto and Harvard University. He served as a staff member in the United States Senate from 1970 to 1972. From 1973 through 1976, he was the Washington editor of National Review magazine. Today, he lives and works in the Washington, D.C., area. 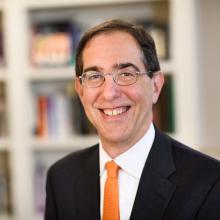 Christopher L. Eisgruber has served as Princeton University’s 20th president since July 2013. He served previously as Princeton's provost for nine years, beginning in 2004, after joining the Princeton faculty in 2001.

In 2001, Eisgruber joined the Princeton faculty as the director of the Program in Law and Public Affairs and the Laurance S. Rockefeller Professor of Public Affairs in the Woodrow Wilson School of Public and International Affairs and the University Center for Human Values. He directed Princeton's Program in Law and Public Affairs from 2001 to 2004. Eisgruber was named Princeton's 11th provost in 2004 and in that capacity was the University's second-ranking official and its chief academic and budgetary officer.

Eisgruber has published numerous articles on constitutional issues and testified multiple times before legislative bodies on the issue of religious freedom. His books include Constitutional Self-Government (2001); Religious Freedom and the Constitution (with Lawrence Sager, 2007); and The Next Justice: Repairing the Supreme Court Appointments Process (2007).

In 2014, Eisgruber was elected to membership in the American Academy of Arts and Sciences. He received an honorary doctorate from the University of Edinburgh in 2015 and was elected an honorary fellow of University College, Oxford, in 2017. He serves as a trustee of ITHAKA and Artstor, and as a director of Liulishuo. He is also a steering committee member of the American Talent Initiative and a member of the Global University Leaders Forum of the World Economic Forum.