The Corruption of Popular Sovereignty

From Professor Issacharoff:  "How does populism undermine democratic governance?  And what, if anything, can be done about it?

This paper roots the current populist challenge in the breach of institutional constraints and the respect for the idea that today’s winners are in office only temporarily, and should expect that the next election may bring rivals to the fore.  The main argument is that democracy without institutional boundaries risks a descent into just trying to get what one can while the getting is good.  This is labeled the problem of corruption and two forms are identified: 1) the corruption of electoral accountability by compromising electoral accountability; and 2) outright corruption as government becomes a process of largesse at the hands of an increasingly autocratic head of state.  The paper concludes by contemplating constitutional law as a constraint on efforts to change up the rules of standing for office, but strengthening the ordinary operation of law to engage the problem of abuse of state authority." 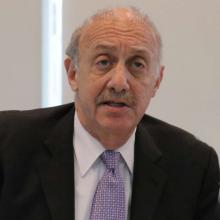 Samuel Issacharoff is the Reiss Professor of Constitutional Law at New York University School of Law. He is the author of Fragile Democracies and is one of the pioneers in the law of the political process, where his Law of Democracy casebook (co-authored with Pam Karlan and Richard Pildes) and dozens of articles have helped shape a new area of constitutional law. He served as the lead reporter for the Principles of the Law of Aggregate Litigation of the American Law Institute. He continues to participate in many of the leading complex litigation cases in courts around the country.

Issacharoff is a 1983 graduate of the Yale Law School. He then began his teaching career at the University of Texas in 1989, where he held the Joseph D. Jamail Centennial Chair in Law. In 1999, he moved to Columbia Law School, where he was the Harold R. Medina Professor of Procedural Jurisprudence. In 2005, he moved to NYU.  His published articles appear in every leading law review, as well as in leading journals in other fields. Issacharoff is a fellow of the American Academy of Arts and Sciences.