The Honorable Rosalie Silberman Abella, Puisne Justice of the Supreme Court of Canada

The Program in Law and Public Affairs invites MPP/MPA students to join us for "Law in the Public Service: Not Just for Lawyers," where our guest will be the Honorable Rosalie Silberman Abella, Puisne Justice of the Supreme Court of Canada.

This event is by invitation only.   If interested, email lapaeven@princeton.edu. 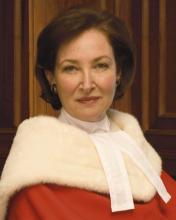 Justice Abella was born in a displaced person's camp in Stuttgart, Germany on July 1, 1946, and her family came to Canada as refugees in 1950.

She was the sole commissioner of the 1984 federal Royal Commission on Equality in Employment, whose report, “Equality in Employment: A Royal Commission Report” was released in 1984. The report fundamentally influenced the fields of employment and human rights law, jurisprudence and public policy. The theories of “equality” and “discrimination” she developed in her report were adopted by the Supreme Court of Canada in its first decision dealing with equality rights under the Canadian Charter of Rights and Freedoms in 1989. The report has been implemented by the governments of Canada, New Zealand, Northern Ireland and South Africa.

Earlier this year, Justice Abella was named Global Jurist of the Year by Northwestern Pritzker School of Law’s Center for International Human Rights. The award honors a sitting judge who has demonstrated courage in the face of adversity to defending human rights or principles of international criminal justice.

Justice Abella is visiting the Woodrow Wilson School as part of its Christian A. Johnson Endeavor Foundation Leadership Through Mentorship Program.