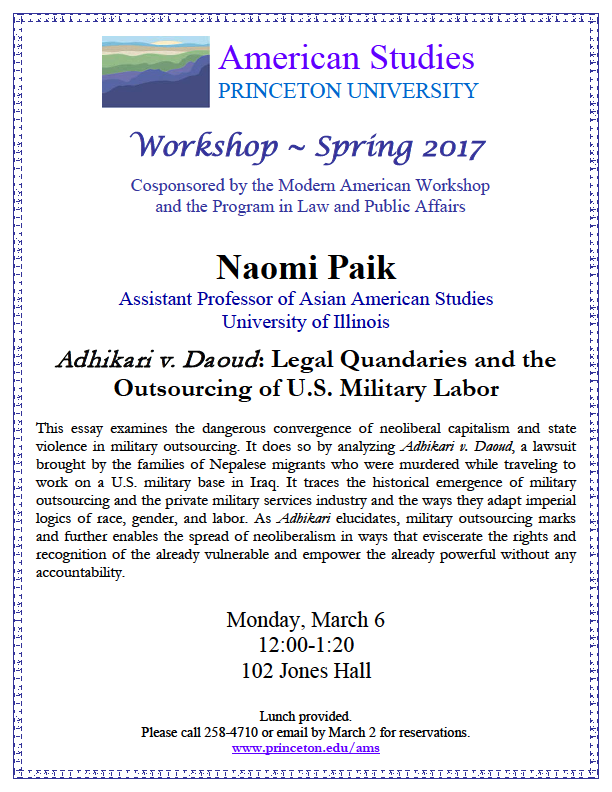 A. Naomi Paik is assistant professor of Asian American studies at the University of Illinois, Urbana-Champaign. Her research and teaching interests include Asian American and comparative ethnic studies; U.S. imperialism; social and cultural approaches to legal studies; transnational and women of color feminisms; carceral spaces; and labor, race, and migration. Her manuscript, Rightlessness: Testimonies from the Camp (UNC Press, 2016), reads testimonial narratives of subjects rendered rightless by the U.S. state through their imprisonment in camps. She has published articles on the indefinite detention of HIV-positive Haitian refugees at Guantánamo in Social Text and Radical History Review. She has also published on post-September 11th attacks on academic freedom, particularly on postcolonial studies, in Cultural Dynamics. She earned her doctorate in American studies from Yale University and held the Chancellor’s Postdoctoral Fellow of Asian American Studies at the University of Illinois, Urbana-Champaign and the Early Career Postdoctoral Fellowship from the Humanities Center of the University of Pittsburgh.