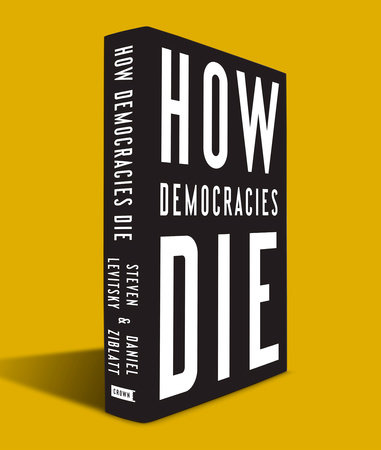 Many Americans are justifiably frightened by what is happening to our country. But protecting our democracy requires more than just fright or outrage. . . . We must learn from other countries to see the warning signs—and recognize the false alarms. We must be aware of the fateful missteps that have wrecked other democracies. And we must see how citizens have risen to meet the great democratic crises of the past, overcoming their own deep-seated divisions to avert breakdown. History doesn’t repeat itself. But it rhymes. The promise of history, and the hope of this book, is that we can find the rhymes before it is too late.

—From HOW DEMOCRACIES DIE Steven Levitsky is David Rockefeller Professor of Latin American Studies and Professor of Government at Harvard University.  His research interests include political parties and party-building, authoritarianism and democratization, and weak and informal institutions, with a focus on Latin America. He is author of Transforming Labor-Based Parties in Latin America: Argentine Peronism in Comparative Perspective (Cambridge University Press 2003), co-author of Competitive Authoritarianism: Hybrid Regimes after the Cold War (Cambridge University Press, 2010) and How Democracies Die (Crown, 2018), and co-editor of Argentine Democracy: The Politics of Institutional Weakness (2005), Informal Institutions and Democracy: Lessons from Latin America (2006), The Resurgence of the Left in Latin America (2011), and Challenges of Party-Building in Latin America (2016).  He is currently writing a book (with Lucan Way) on the durability of revolutionary regimes. Daniel Ziblatt is Professor of Government at Harvard University and a faculty associate in residence at Harvard University's Minda De Gunzburg Center for European Studies. He is the author of three books: How Democracies Die (2018) (with Steven Levitsky) as well as two single-authored books Conservative Parties and the Birth of Democracy (Cambridge: Cambridge University Press, 2017) and Structuring the State: The Formation of Italy and Germany and the Puzzle of Federalism (Princeton University Press, 2006). He has been the recipient of numerous scholarly prizes from the American Political Science Association, and he has held fellowships in the United States and Europe, including the 2017 Fernand Braudel Senior Fellowship at the European University Institute (Florence Italy), as well as fellowships at Harvard's Radcliffe Institute for Advanced Study and Stanford's Center for Advanced Study.  He has been a DAAD Fellow in Berlin, an Alexander von Humboldt visiting fellow at the Max Planck Institute in Cologne and the University of Konstanz, Germany, and visiting professor at Sciences Po Paris (2014) and Ecole Normale Superieure, Paris (2009).