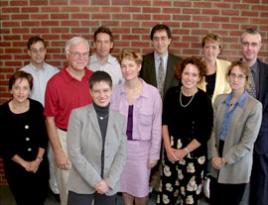 While at LAPA
Alfred C. Aman is a Phi Beta Kappa graduate of the University of Rochester with a bachelor of arts in political science in 1967. He earned his J.D. in 1970 from the University of Chicago Law School, where he served as executive editor of the Law Review. Following his graduation, he clerked for the late Elbert Parr Tuttle, senior judge of the Fifth Circuit Court of Appeals, in Atlanta. Aman joined the law firm of Sutherland, Asbill and Brennan (of Atlanta and Washington, D.C.) in 1972. In 1977, he joined the faculty of the Cornell Law School, where he taught until 1991, leaving to become dean at Indiana University School of Law-Bloomington. Aman has continued to teach and write throughout his deanship, and has held appointments as Fulbright Distinguished Chair in Comparative Constitutional Law at the University of Trento, Italy; Visiting Professor of Law at the University of Paris; and Visiting Fellow of Wolfson College, Cambridge, England. A specialist in constitutional and administrative law, Aman has published a monograph on globalization (Administrative Law in a Global Era, Cornell University Press), a treatise and casebooks on administrative law, and numerous articles and essays. Aman will soon begin work on a book dealing with globalization and democracy. He plans to return to Bloomington following his Princeton fellowship as a member of the law faculty where, in 1999, he was named Roscoe C. O'Byrne Professor of Law.

While at LAPA
Sarah Barringer Gordon is a legal historian who specializes in the history of religion in America. She is a professor of law and history at the University of Pennsylvania, where she teaches property, religious history, and courses on church and state. She has published work on blasphemy, women's suffrage, law and literature, and is the author of The Mormon Question: Polygamy and Constitutional Conflict in Nineteenth Century America (University of North Carolina Press, 2002). Gordon holds a bachelor's degree from Vassar College, a J.D. and a Masters in Divinity from Yale, and a Ph.D. in history from Princeton. While at Princeton, she will begin work on a new book project, investigating the litigation practices of religious organizations in the twentieth century, and their important role in the tectonic shift in the understanding of what it means to exercise freedom and bear rights. She also will teach a course: "Resurgence and Rebirth: American Religion and Legal Change in the Twentieth Century."

While at LAPA
Ran Hirschl is an assistant professor of political science at the University of Toronto. His primary areas of interest are comparative public law, constitutional rights, and judicial politics. He holds a bachelor's, master's, and an LL.B. from Tel-Aviv University, as well as a master of arts, master of philosophy, and a Ph.D. from Yale University. He has published extensively on comparative constitutional law and politics in journals such as Law & Social Inquiry, Comparative Politics, Human Rights Quarterly, American Journal of Comparative Law, University of Richmond Law Review, Stanford Journal of International Law, and Canadian Journal of Law and Jurisprudence; as well as in several acclaimed edited volumes. While at Yale and at the University of Toronto he received several fellowships and awards, including a Fulbright Scholar nomination and a Canada Social Science and Humanities Research Council Grant. While at Princeton, he will be completing a book entitled Towards Juristocracy: A Comparative Inquiry into the Origins and Consequences of the New Constitutionalism (Harvard University Press).

While at LAPA
Kal Raustiala is an acting professor at UCLA Law School. His research focuses on the links between law and international relations, including regulatory cooperation, international agreements, compliance, and sovereignty. He holds a bachelor's in political science from Duke University, a Ph.D in political science from U.C. San Diego, and a J.D. from Harvard Law School. Raustiala has been a research fellow at the Brookings Institution in Washington DC, an assistant professor at Brandeis University, and is a member of the Council on Foreign Relations. He is co-editor of The Implementation and Effectiveness of International Environmental Commitments (with D.G. Victor and E. Skolnikoff, 1998). At Princeton, he will explore the influence of changes in interdependence and globalization on domestic legal doctrines of territoriality and sovereignty, as well as the ways in which international institutions challenge domestic sovereignty and democracy. He will also be a visiting professor in the Politics Department, teaching courses on public international law and global environmental cooperation.