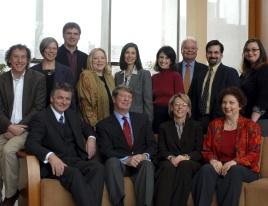 While at LAPA
Robert B. Ahdieh is a Professor of Law and Director of the Center on Federalism and Intersystemic Governance, at Emory Law School. He is the Microsoft-LAPA Fellow for the 2007-2008 academic year.

A graduate of Princeton University's Woodrow Wilson School of Public and International Affairs and Yale Law School, Professor Ahdieh served as law clerk to Judge James R. Browning of the U.S. Court of Appeals for the Ninth Circuit, before his selection for the Honor's Program in the Civil Division of the U.S. Department of Justice.

While still in law school, Professor Ahdieh published what remains one of the seminal treatments of the constitutional transformation of post-Soviet Russia: Russia's Constitutional Revolution - Legal Consciousness and the Transition to Democracy. Ahdieh's work has also appeared in the Michigan Law Review, the NYU Law Review, the Southern California Law Review, and the Emory Law Journal, among other journals.

Professor Ahdieh's scholarly interests revolve around questions of regulatory design. His particular emphasis has been various non-traditional modes of regulation, including especially those grounded in dynamics of coordination. Paradigms of coordination, though relatively less attended to in the legal literature, hold significant promise both in helping to theorize existing regulatory patterns and in fostering new regulatory constructs.

He has explored these issues in a variety of transactional areas, including corporate and securities law, international trade and finance, and contracts. Within these, Professor Ahdieh’s work has emphasized two particular patterns of coordination: The first – intersystemic governance – draws on domestic regimes of federalism and transnational regimes of global governance and subsidiarity, to highlight patterns of jurisdictional overlap that, in their very complexity, may offer significant normative utility. The second – patterns falling under a rubric of ‘The New Regulation’ – draws more directly on coordination game dynamics, to highlight various non-traditional regulatory forms, as well distinct occasions for potential regulatory intervention.

While at Princeton, he will work on a pair of books, entitled The New Regulation and Governing Standards.

While at LAPA
Carol A. Heimer is Professor of Sociology at Northwestern University and Senior Research Fellow at the American Bar Foundation. She received her BA from Reed College and her PhD from the University of Chicago. Heimer has written on risk and insurance (Reactive Risk and Rational Action), organization theory (Organization Theory and Project Management), the sociology of law and the sociology of medicine (For the Sake of the Children, winner of both the theory and medical sociology prizes of the American Sociological Association). A recipient of the Ver Steeg Award for graduate teaching, she usually teaches courses on law, medicine, and qualitative methods, though a recent seminar delved into the sociology of moral experience. During her year at Princeton, she will write a book from her NSF-funded comparative study of the role of law in medicine. In recent years, American medicine has been "legalized" as relatively informal regulation by professional peers has been supplanted by an increasingly rule-based system. By no means confined to the US, this rule-based regulation has diffused widely, sometimes freely adopted by medical workers eager for the legitimacy conferred by American medical science, at other times imposed on foreign scientific colleagues by American funding agencies and research organizations. The Legal Transformation of Medicine will be grounded in ethnographic work and interviews on the use of rules (broadly conceived) in HIV/AIDS clinics in the US, Uganda, South Africa, and Thailand.

While at LAPA
Peter Lindseth is Professor at the University of Connecticut School of Law, where he has taught since 2000. His research focuses on the relationship between public law and the nation-state in Western Europe and North America, primarily in the nineteenth and twentieth centuries. His work has appeared in the Yale Law Journal, the Columbia Law Review, and the University of Toronto Law Journal, among other publications. He holds a B.A., magna cum laude in history, and J.D. from Cornell, and a M.A., M.Phil., and Ph.D. in European history from Columbia, where he was also Managing Editor of The Columbia Journal of European Law. At Princeton, Lindseth will work on a project comparing European and American debates in public law (particularly constitutional and administrative law, but also aspects of public international law) from the 1870s to the 1930s. His aim is to elaborate a specific historiographical perspective on the relationship of legal, institutional, and social change in the modern nation-state, one that animates much of his recent work. Lindseth's approach echoes elements in structuration theory in sociology and historical institutionalism in political science, combining functional, political, and cultural dimensions, while also touching on issues raised in recent legal-historical discussions of popular constitutionalism and the relationship of law to historical memory.

While at LAPA
Aidan O'Neill is a Queen's Counsel (QC), Edinburgh and London, and he will be the inaugural University Center for Human Values (UCHV)/LAPA Fellow in Law and Normative Inquiry. O'Neill is qualified to appear as counsel in Scotland, as well as in the courts of England and Wales. He practices law in both jurisdictions, and over the past twenty years has established a public law/commercial practice involving a significant element of legal advice and court appearances on issues of European law, particularly in the fields of human rights, private international law, commercial contract, and employment and discrimination law. He has appeared as senior counsel before the European Court of Justice, the Judicial Committee of the Privy Council, the House of Lords, the Court of Session (Inner and Outer House), and the High Court of England & Wales. Since taking silk in Scotland in 1999, he has maintained a strong profile in discrimination and employment law issues, while his practice has continued to develop in the area of judicial review, (notably in relation to prisoners' rights) as well as in issues of constitutional law post-devolution. He has a particular interest in the inter-relationship between EU law, human rights law and domestic law.

In addition to law degrees from the universities of Edinburgh (LL.B. (Hons.)(First Class)) and of Sydney, Australia (LL.M. (Hons.)(First Class)), Aidan O'Neill also holds a Masters degree in European and International Law from the European University Institute, Florence. He has written three legal textbooks to date: EC for UK Lawyers, a guide to the continuing impact which EU law has on a wide variety of domestic fields of UK legal practice; Decisions of the European Court of Justice and their Constitutional Implications, a survey of the manner in which the European Court of Justice created the conditions for a European constitution and has transformed the UK constitution; and Judicial Review in Scotland: A Practitioner's Guide. He has also contributed chapters to a number of legal books, and is the author of many talks and articles in academic journals —including Public Law, Modern Law Review, Common Market Law Review, Edinburgh Law Review, Northern Ireland Legal Quarterly and Legal Studies — dealing, in the main, with issues of human rights, constitutional law and EU law.

While at Princeton, he will be concerned with topics involving more general normative inquiry and, reflecting on his experience in legal practice, will conduct research into the interaction between law, politics and religion, and will concentrate, particularly, on the relationship between Christianity and democracy and on the law-morals debate/divide.