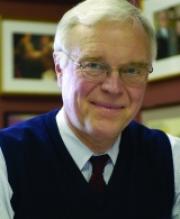 While at LAPA
Alfred C. Aman is a Phi Beta Kappa graduate of the University of Rochester with a bachelor of arts in political science in 1967. He earned his J.D. in 1970 from the University of Chicago Law School, where he served as executive editor of the Law Review. Following his graduation, he clerked for the late Elbert Parr Tuttle, senior judge of the Fifth Circuit Court of Appeals, in Atlanta. Aman joined the law firm of Sutherland, Asbill and Brennan (of Atlanta and Washington, D.C.) in 1972. In 1977, he joined the faculty of the Cornell Law School, where he taught until 1991, leaving to become dean at Indiana University School of Law-Bloomington. Aman has continued to teach and write throughout his deanship, and has held appointments as Fulbright Distinguished Chair in Comparative Constitutional Law at the University of Trento, Italy; Visiting Professor of Law at the University of Paris; and Visiting Fellow of Wolfson College, Cambridge, England. A specialist in constitutional and administrative law, Aman has published a monograph on globalization (Administrative Law in a Global Era, Cornell University Press), a treatise and casebooks on administrative law, and numerous articles and essays. Aman will soon begin work on a book dealing with globalization and democracy. He plans to return to Bloomington following his Princeton fellowship as a member of the law faculty where, in 1999, he was named Roscoe C. O'Byrne Professor of Law.

Economic globalization has had a chilling effect on democracy since markets now do some of the work that governments used to do through the political process. More than two decades of deregulation have made a healthy economy appear to depend on unrestrained markets. But appearances are misleading—globalization is also a legal and political process. The future of democracy in the twenty-first century depends on the ability of citizens to reclaim a voice in taming globalization through domestic politics and law reform.

Can citizens govern globalization? Aman argues that they can, and that domestic law has a crucial role to play in this process. He proposes to redefine the legal distinction between public and private to correspond to the realities of the new role of the private sector in delivering public services, and thereby to bring crucial sectors of globalization back within the scope of democratic reform.

Basing his argument on the history of the policies that led to globalization, and the current policies that sustain it, Aman advocates specific reforms meant to increase private citizens' influence on globalization. He looks at particular problem areas usually thought to be domestic in nature, such as privatization, prisons, prescription drugs, and the minimum wage, as well as constitutional structural issues such as federalism and separation of powers.