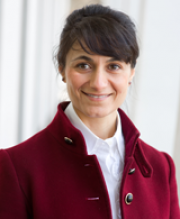 Arzoo Osanloo is an Associate Professor at the University of Washington’s Law, Societies, and Justice Program. In addition, she holds adjunct positions in the School of Law, and the Departments of Anthropology, Comparative Religion, Near East Languages and Civilization and Women’s Studies. She currently serves on the Executive Board of the Middle East Section of the American Anthropological Association. She has a Ph.D. in Anthropology from Stanford and a J.D. from American University Washington College of Law. Formerly an immigration and asylum/refugee attorney, Professor Osanloo conducts research and teaches courses focusing on the intersection of law and culture, including human rights, refugee rights and identity, and women’s rights in Muslim societies. Her geographical focus is on the Middle East, especially Iran. Her book, The Politics of Women’s Rights in Iran (2009), is published by Princeton University Press and she has published in anthropology and interdisciplinary journals. She is currently working on a new project that considers the Islamic mandate of forgiveness, compassion, and mercy in Iran’s criminal sanctioning system, jurisprudential scholarship and everyday acts among pious Muslims.