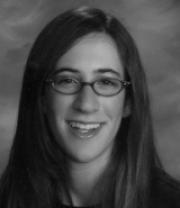 Elizabeth Ingriselli, from Scarsdale, New York, is a sophomore at Princeton University. Although still undecided about her major, she is thinking about concentrating in either politics or psychology. She also would like to pursue a certificate in linguistics. Before coming to Princeton Elizabeth served as president of Brightening Lives Foundation, Inc., a company she started in 2006 to promote alternative forms of energy and decrease Americaï¿½s dependence on foreign oil. As president she lobbied New York Senators Clinton and Schumer to pass energy efficient legislation. For her efforts to promote alternative forms of energy Elizabeth received the Girl Scout Gold Award. At Princeton Elizabeth is the undergraduate chair of LAPA, co-director of Princeton Model Congressï¿½ Supreme Court program, co-chair of Wilson College Councilï¿½s Trips Committee and treasurer of club tennis. During the summer of 2008 Elizabeth will be working as an intern at the Westchester District Attorneyï¿½s Office in the Superior Court Trial Division. During her remaining years at Princeton Elizabeth hopes to learn more about constitutional and criminal law, subjects in which she is very interested.