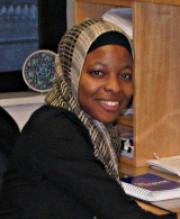 Intisar Rabb received her JD from Yale Law School, and is a PhD Candidate at Princeton University, where she is writing a dissertation on legal maxims in comparative American and Islamic law. After completing law school, and prior to returning to Princeton, she served as a law clerk to the Honorable Thomas L. Ambro of the United States Court of Appeals for the Third Circuit. Last year, she held a fellowship at the University Center for Human Values. This year, she holds the Mrs. Giles C. Whiting Fellowship and is a fellow at the Center for the Study of Religion. She is also active in LAPA as a graduate associate.

In 1999, Intisar graduated from Georgetown University with an honors degree in Government and Arabic, a course of study that included spending a year abroad in Cairo. After graduating, she completed a one-year intensive program in Islamic studies/law at the Abu Nour Institute in Damascus. She has also studied in Iran, Morocco, and Senegal. She speaks fluent Arabic, is proficient in Persian, and has reading knowledge of French, German, and Spanish.

In addition to Islamic and comparative law, Intisar's academic interests include American constitutional law and statutory interpretation, American criminal law, and the history of legal process and canonization in both systems of law.