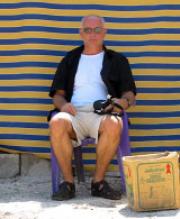 John Borneman is Professor of Anthropology and currently Director of Graduate Studies in the Department of Anthropology. He has conducted fieldwork in Germany and Central Europe, and in Lebanon and Syria. His research focuses on two sets of relationships: on the relation of the state and law to intimacy and practices of care; and on the relation of political identification, belonging, and authority to forms of justice, accountability, and regime change. He also works on questions of epistemology and knowledge in the public sphere, and on psychoanalytic understandings of the self, group formation, and political form. Professor Borneman teaches courses on the self, intersubjectivity, revolution, memory, and social theory.

When Princeton anthropologist John Borneman arrived in Syria's second-largest city in 2004 as a visiting Fulbright professor, he took up residence in what many consider a "rogue state" on the frontline of a "clash of civilizations" between the Orient and the West. Hoping to understand intimate interactions of religious, political, and familial authority in this secular republic, Borneman spent much time among different men, observing and becoming part of their everyday lives. Syrian Episodes is the striking result. Recounting his experience of living in Aleppo's ancient marketplace and lecturing at its modern university, he offers deft, first-person stories of the longings and discontents expressed by Syrian sons and fathers. Combining literary imagination and anthropological insight, the book's discrete narratives converge in an unforgettable portrait of contemporary culture in Aleppo.

We read of romantic seductions, rumors of spying, the play of light in rooms, the bargaining of tourists in bazaars, and an attack of wild dogs. With unflinching honesty and frequent humor, Borneman describes his encounters with students and teachers, customers and merchants, and women and families, many of whom are as intrigued with the anthropologist as he is with them. Refusing to patronize those he meets or to minimize his differences with them, Borneman provokes his interlocutors, teasing out unexpected confidences, comic responses, and mutual misunderstandings. He engages the curiosity and desire of encounter and the possibility of ethical conduct that is willing to expose cultural differences.

Syrian Episodes is a sophisticated exploration—precise, vivid, ironic—of the predicaments of Arabs in a contemporary world.