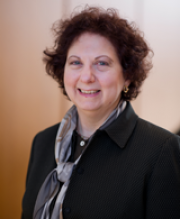 Judi Rivkin is the Events Manager for the Program in Law and Public Affairs at Princeton University. She comes to LAPA from the James Madison Program in American Ideals and Institutions, where she was Events Administrator for several years. Judi is a native of New Jersey, and returned to the Garden State late in 2001 after spending many years in Seattle. During her stay on the west coast, she was chorale administrator for the Seattle Symphony, held administrative positions in technology and medical organizations, and developed and led multiple programs in English country dance. While employed by the New York Yankees, Judi was the staff person for the Olympic Overview Commission chaired by George Steinbrenner. She has a B.A. in public relations from the University of Southern California, as well as additional background in electronic, print and broadcast media.