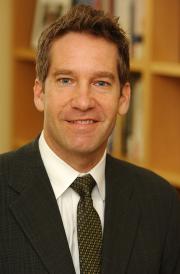 While at LAPA
Kal Raustiala is an acting professor at UCLA Law School. His research focuses on the links between law and international relations, including regulatory cooperation, international agreements, compliance, and sovereignty. He holds a bachelor's in political science from Duke University, a Ph.D in political science from U.C. San Diego, and a J.D. from Harvard Law School. Raustiala has been a research fellow at the Brookings Institution in Washington DC, an assistant professor at Brandeis University, and is a member of the Council on Foreign Relations. He is co-editor of The Implementation and Effectiveness of International Environmental Commitments (with D.G. Victor and E. Skolnikoff, 1998). At Princeton, he will explore the influence of changes in interdependence and globalization on domestic legal doctrines of territoriality and sovereignty, as well as the ways in which international institutions challenge domestic sovereignty and democracy. He will also be a visiting professor in the Politics Department, teaching courses on public international law and global environmental cooperation.
Publications:
"The Evolution of Territoriality: International Relations and American Law," in Miles Kahler and Barbara Walter, eds, Territoriality and Conflict in an Era of Globalization (Cambridge Univ. Press, 2006).

"The Boundaries of the Bill of Rights," Los Angeles Times Editorial (2005).

"The New Bipartisanship: To the Extreme," The NewRepublic Online (2005).

"Benedict XVI's Other Role : Church and State," The NewRepublic Online (2005).

"Restoring Iraqi Sovereignty : How Independent Will Iraq Really Be?," FindLaw (2004)

"America Abroad : U.S. May Not be Imperial, But it Does Have an Empire," International Herald Tribune (2003)

"Does the Constitution Follow the Flag?: Iraq, the War on Terror, and the Reach of the Law," FindLaw (2003)

"Eat, Drink and Be Wary : Why the U.S. Should Oppose the WTO's Extending and Spirit Names to Other Products," FindLaw (2002).