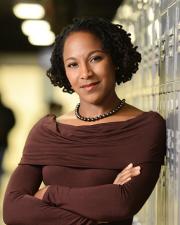 Kimani Paul-Emile specializes in the areas of law and biomedical ethics, health law, antidiscrimination law, and race and the law. At Fordham, she also serves Associate Director and Head of Domestic Programs and Initiatives at the Center on Race, Law and Justice, and as faculty co-director of its Stein Center for Law and Ethics.  Professor Paul-Emile’s scholarship has been published widely in leading law reviews as well as in the New England Journal of Medicine and covered by national and international news outlets. For her article, “Blackness as Disability,” she received the Law and Society Association’s 2019 John Hope Franklin Prize, awarded for “exceptional scholarship in the field of Race, Racism and the Law.”  Professor Paul-Emile served as associate counsel at the Brennan Center for Justice at New York University School of Law and practiced civil rights law at the Center for Constitutional Rights, where she was a National Association for Public Interest Law (now Equal Justice Works) Fellow and later the William Moses Kunstler Fellow for Racial Justice. She also served as Senior Faculty Development Consultant at the New York University Center for Teaching Excellence.  Professor Paul-Emile holds an A.B. degree in Political Science and American Civilization, with honors, from Brown University, a J.D. from Georgetown University Law Center, and a Ph.D. in American Studies from New York University.  At LAPA, she will be working on a book project that examines how lawmakers are able to regulate drugs differently irrespective of the dangers the drugs may pose and independent of their health effects, and the process followed to achieve this phenomenon.