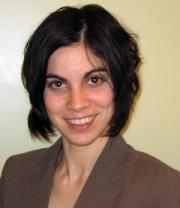 Laura M. Weinrib is a Ph.D. Candidate in the Department of History at Princeton University and a Samuel I. Golieb Fellow in Legal History at the New York University School of Law. After receiving her J.D. from Harvard Law School in 2003, she clerked for Judge Thomas L. Ambro of the United States Court of Appeals for the Third Circuit.

Laura’s principal field of study is twentieth-century American legal history. Her published articles have focused on civil liberties, legal thought, family law, gender, and discrimination. Her research and teaching interests also include administrative law, constitutional law, labor law, and property. In her scholarship, Laura seeks to expose the contingencies of entrenched legal concepts and to highlight the mutually constitutive relationship between law and society.


Dissertation
Laura’s dissertation describes the emergence of a libertarian model of free speech in the United States between World War I and World War II. Based on extensive archival research, it argues that the interwar civil liberties movement gradually exchanged its Progressive emphasis on political and economic reform for a new, recognizably modern commitment to legally enforceable individual rights. More generally, it proposes that the articulation of civil liberties during the 1920s and 1930s provided a vocabulary for the state-skeptical liberalism of the postwar period and ultimately for the rehabilitation of the courts as a forum of social advocacy.

Today, most Americans assume that individuals are entitled to engage in speech that does not jeopardize the immediate health or safety of others. In 1920, by contrast, few Americans would have agreed upon the meaning of the term “civil liberties,” much less endorsed a libertarian agenda. It was during the 1920s and 1930s—decades largely neglected by historians of free speech—that the modern understanding of civil liberties took shape. Civil libertarians slowly divorced the “free speech rights” they advocated from the underlying political views of the speakers they defended. They also began to articulate a distinction between “civil liberties” and other social causes they deemed worthy, like “civil rights” and “labor rights.” Their eventual endorsement of personal autonomy paved the way for the rights-based liberalism of the postwar period.

The dissertation makes three central contributions to the existing scholarship on civil liberties. First, by examining how and why civil libertarians settled upon their litigation strategy, it demonstrates that protecting civil liberties need not have become a constitutional project. In the years after World War I, most proponents of free speech were hostile to Lochner-era legalism and preferred to pursue free speech through legislative and regulatory measures; when they did bring their cases to court, they made common law and statutory claims. By the mid-1930s, the free speech fight was squarely on legal terrain, and civil liberties were thoroughly constitutionalized. Understanding this transformation casts light on a broader embrace of legalism in mid-twentieth century political culture. When their early efforts proved unsuccessful, civil liberties groups turned to the judicial forum. They selected test cases carefully, working in areas like sex education and academic freedom toward which public opinion was favorable. In contrast to the defense of anarchists and communists, these cases pushed courts toward a more libertarian stance without triggering public outrage. Civil liberties lawyers were instrumental in this transition. Whereas many free speech advocates remained deeply skeptical of constitutional litigation and its language of rights, the lawyers, forcefully if often reluctantly, advocated a court-based and constitutional approach that would shortly become the signature of the civil liberties movement.

Second, in explaining how civil liberties became a fundamental American freedom, the dissertation highlights the historical specificity of legal categories that are now taken for granted. The popularization of the civil liberties movement over the course of the 1920s and 1930s—its transformation in just two decades from radical heresy to American icon—was a remarkable ideological coup. But it was not a revolution plotted out in advance by libertarian ideologues. In formulating their theory of free speech, civil libertarians reacted to government accusations of radicalism and Soviet collaboration, the success of rights-based litigation and the corresponding failure of legislative efforts, the professionalization of civil liberties advocacy, and the rise of totalitarianism abroad and administrative governance at home, among other factors. Their state-skeptical, content-neutral concept of civil liberties (and, by extension, a distinctively American devotion to free speech absolutism) developed piecemeal. By teasing out the many early approaches to civil liberties advocacy, the dissertation emphasizes the accidents, inconsistencies, and idiosyncrasies that generated the modern understanding of the term.

Finally, exploring tensions among the various actors agitating for free speech in this early period reveals the hidden costs of the institutionalization of civil liberties. The reformers-turned-radicals who ran the interwar movement imagined civil liberties as an umbrella category for anti-militarism and workers’ rights, a backdoor approach to a just society. They reluctantly defended the speech of racists and reactionaries, but they regarded substantive equality, secured with state assistance, as part and parcel of the civil liberties agenda. Moreover, in the wake of the nationalist hysteria of the First World War, they feared oppression by corporations and private citizens just as much as government censorship. For a variety of reasons—some institutional and strategic, others political and theoretical—the interwar civil libertarians traded in their early ambitions for an emphasis on individual autonomy. Whatever its benefits, the new approach supplanted a prior commitment to economic security and social equality, within and outside the civil liberties movement. By providing a nationally palatable language of individual rights, the transformation in free speech paved the way for an individualist turn in civil rights and labor advocacy and, more broadly, in American political and legal culture.

This article examines the 1920s expansion of the ACLU agenda to incorporate nonpolitical speech. At the beginning of that decade, it was ACLU policy to contest only those obscenity regulations that were “relied upon to punish persons for their political views.” By 1931, however, the ACLU was the undisputed leader of the anti-censorship campaign, an aggressive advocate not only of unfettered scientific discussion but also of artistic freedom and birth control. With that shift, a new model of civil liberties began to take shape—one that celebrated individual expressive freedom over substantive political reform.

The catalyst for change was a postal censorship dispute involving a sex education pamphlet, The Sex Side of Life: an Explanation for Young People, written by the former suffragist and outspoken birth control activist Mary Ware Dennett. Postal authorities declared the pamphlet obscene despite effusive praise by medical practitioners, religious groups, and government agencies for its frank and objective style. When Dennett continued to circulate it by mail in defiance of the postal ban, she was prosecuted for obscenity, and she responded by challenging the postal censorship laws. ACLU board members agreed to sponsor Dennett’s case because it instructed the youth on an issue of social importance, thereby advancing the public interest in a direct and familiar Progressive way. Unexpectedly, however, the litigation unleashed a far more sweeping anti-censorship initiative. Dennett’s heavily publicized conviction, overturned by the Second Circuit on appeal, generated popular hostility toward the censorship laws and convinced ACLU attorneys that speech should be protected regardless of its social worth.

This essay explores the role of the interwar civil liberties movement in rehabilitating the discourse of rights and “judicializing” the American welfare state. It posits that the emergence during the mid-twentieth century of a private administrative apparatus for the compensation of tort victims was the culmination of a decades-long discussion among civil libertarians about regulatory power. In the early interwar period, advocates of free speech sought to promote pluralism through legislation and regulation. By the onset of World War II, however, they had instead adopted a court-centered strategy that emphasized individual autonomy. The popular and political resonance of their new state-skeptical vocabulary suggests that post-New Deal liberalism in America was a hybrid of classical and Progressive approaches.

This article critiques the contractualization of family law and proposes in its place a model of constructive trust applicable to intimate relationships. It examines the primary mechanisms of relational contracting, including pre- and post-marital contracts and settlement agreements, and suggests that contract law is inadequate to govern the dissolution of non-marital partnerships. It then introduces the doctrine of constructive trust, describes its development in property and partnership law, and explores its potential implications for the way relational dissolution is understood. The article seeks to dispel the assumption that public ordering of the family impedes identity formation and decisional autonomy, and it stresses the need for an alternative to both contract law and traditional family law in the domain of family relations.

The goals of this article were to expose and ameliorate the social disadvantages encountered by Massachusetts children living in “informal” kinship care relationships, that is, in the care of relatives or other adults lacking legal custody or guardianship. Faced with prospective legal liability for acting without parental consent, many schools and medical facilities in Massachusetts denied services to informal kinship care children. The article recommended educational and medical consent legislation as a mechanism for delegating decisionmaking authority in Massachusetts. The suggested legislation was designed to ensure proper education and medical attention to a growing and vulnerable population of Massachusetts children. A bill modeled on the proposal, HB 4718, An Act Relative to Caregiver Medial and Educational Consent, was signed into law in 2009.

This book introduces English-language readers to an underground publication, Nitzotz, edited and circulated in Kovno ghetto and Dachau-Kaufering concentration camp. Nitzotz is the only known Hebrew publication to have appeared consistently throughout the Nazi occupation anywhere in Europe. Of the forty-two issues released prior to liberation, five, produced in Dachau-Kaufering, survived. These issues offer an unparalleled example of resistance through writing under the most abject of circumstances. The authors of Nitzotz expected to be held accountable for their activity during the war, and they rejected partisan differences in favor of a united movement that would prepare the survivors for life after liberation. They believed that their uninterrupted commitment to national work, even within Dachau-Kaufering, would equip them to lead the postwar effort for the physical and spiritual regeneration of European Jewry.

Nitzotz presents a striking challenge to the historiographic assumption that rational assessment of the future was impossible within the concentration camps. The majority of its articles were political or ideological in nature, though it also contained tributes to fallen leaders of the movement, as well as poetry. Throughout the war, the journal’s principal emphasis was on building a Jewish national community. The authors did not turn inward and dwell on the details of daily life in the camp. Instead, they engaged in a forward-looking, community-oriented debate about the future of the Jewish nation. Their analysis—which touched upon such issues as the just distribution of Jewish and Arab lands, the plight of Soviet Jewry, and the potential value of a war crimes tribunal after the war—was astoundingly prescient and astute.

The book contains a translation of the five surviving Dachau-Kaufering issues along with an extensive critical introduction.