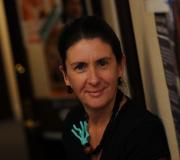 While at LAPA
Nancy Maveety is a former chair of the political science department at Tulane University. She visited us as a WWS-LAPA-Katrina fellow. She is the author of Representation Rights and the Burger Years (Michigan, 1991) and Sandra Day O'Connor: Strategist on the Supreme Court (Rowman Littlefield, 1996). She is also the editor of The Pioneers of Judicial Behavior (Michigan, 2003), which is on the public law generals exam list in the politics department at Princeton. She is presently working on a book on the Rehnquist Court with a National Science Foundation grant to review the Blackmun papers. Maveety was awarded a Fulbright Fellowship to Estonia in 2001 which resulted in the article, "Constrained: Constitutional Courts as Conduits for Democratic Consolidation" in the Law and Society Review (June 2004). In addition to her non-fiction writing, she is also the author of a presciently titled novel called The Stagnant Pool: Scholars Below Sea Level, (University Press of the South, 2000).

“The Rise of the Choral Court: Use of Concurrence in the Burger and Rehnquist Courts” (with Charles C. Turner and Lori Beth Way) Political Research Quarterly (January 2009)