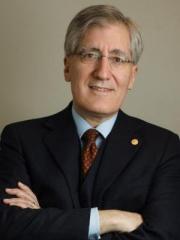 Robert P. George is McCormick Professor of Jurisprudence and Director of the James Madison Program in American Ideals and Institutions at Princeton University. He is also frequently a Visiting Professor at Harvard Law School.

In addition to his academic service, Professor George has served as Chairman of the U.S. Commission on International Religious Freedom. He has also served on the President’s Council on Bioethics, as a presidential appointee to the United States Commission on Civil Rights, and as the U.S. member of UNESCO’s World Commission on the Ethics of Science and Technology.

He is a former Judicial Fellow at the Supreme Court of the United States, where he received the Justice Tom C. Clark Award.

He serves on the boards of the John M. Templeton Foundation Religion Trust, the Lynde and Harry Bradley Foundation, the Ethics and Public Policy Center, the Becket Fund for Religious Liberty, the National Center on Sexual Exploitation, and the Center for Individual Rights, among others.

A graduate of Swarthmore College, Professor George holds M.T.S. and J.D. degrees from Harvard University and the degrees of D.Phil., B.C.L., and D.C.L. from Oxford University. He was elected to Phi Beta Kappa at Swarthmore and received a Frank Knox Fellowship from Harvard for graduate study in law and philosophy at Oxford.  He holds nineteen honorary degrees, including doctorates of law, letters, ethics, science, divinity, humane letters, civil law, law and moral values, humanities, and juridical science.

series of interdisciplinary works in law, culture, and politics.  He is a member of the Council on Foreign Relations and is Of Counsel to the law firm of Robinson & McElwee.