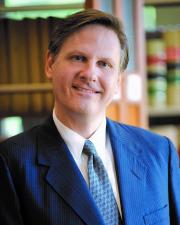 Home Institution, The University of Tulsa College of Law

Robert Spoo’s research combines legal and literary perspectives at the intersection of copyright law, authorship, publishing history, informal norms, and theories of the public domain. Formerly an English professor and editor of the James Joyce Quarterly, Professor Spoo was drawn to the law in part because of the obstructive role that copyright holders can play in relation to creativity and scholarship. He was a member of the legal team that sued the James Joyce estate for its misuse of copyrights and its bullying of a literature scholar in Shloss v. Sweeney. Much of his published work focuses on the role of informal norms in publishing and authorship and the ways in which such norms have historically been employed to imitate copyrights in markets lacking formal legal protections. In addition to books and editions on James Joyce, Ezra Pound, and other modern authors, Professor Spoo recently published Without Copyrights: Piracy, Publishing, and the Public Domain (2013), a study of copyright-like norms in nineteenth- and twentieth-century publishing, and Modernism and the Law (2018), a survey of modern literature and the legal regimes of obscenity, defamation, copyright, privacy, and publicity. The latter book was written with the support of a 2016 Guggenheim Fellowship. Professor Spoo holds a B.A. in English from Lawrence University, a Ph.D. in English from Princeton University, and a J.D. from the Yale Law School.  After law school, he clerked for the Honorable Sonia Sotomayor when she was a judge on the U.S. Court of Appeals for the Second Circuit, and practiced law with major firms in New York, San Francisco, and Tulsa. While at LAPA as the Crane Fellow, his project will explore the “courtesy” norms that nineteenth-century American publishers fashioned to fill the U.S. copyright vacuum for foreign authors’ works.