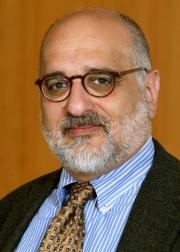 Steven Wilf is the Joel Barlow Professor of Law at the University of Connecticut, where he was one of the founders of the Intellectual Property Program. He received both his Ph.D. in History from Yale University and his law degree from Yale Law School in 1995. He served as a law clerk for the U.S. Court of Appeals for the Second Circuit before joining the Connecticut faculty. A scholar whose research focuses upon intellectual property law, historical jurisprudence, and legal history, he seeks to explore the fundamental ways that the origins of legal processes effect normative outcomes. Numerous essays and a recent book, The Law Before the Law (Rowman & Littlefield, 2008), explore imaginative, often extra-official understandings of legalism. His latest book, Law’s Imagined Republic: Popular Politics and Criminal Justice in Revolutionary America, will be published this year by Cambridge University Press. He has been a visiting professor at Hebrew University, Jerusalem and DAAD guest professor at the Freie Universitat, Berlin. He also has held fellowships as John Carter Brown Fellow at Brown University, Fellow in Comparative Legal History at the University of Chicago, Samuel Golieb Fellow at the New York University Law School, and, most recently, Fellow at the Institute for Advanced Studies in Jerusalem. At Princeton, Wilf will continue his current work on a book, under contract with Cambridge University Press, examining the history of United States intellectual property law from its beginnings to the present. He will be the Microsoft/LAPA Fellow in Law, Property and the Economic Organization of Society.